Located in southwestern Colorado, right on the Utah state border, Hovenweep National Monument is an amalgamation of six ancient Native American settlement ruins. The Hovenweep National Monument as a whole is located west of the city of Cortez, Colorado. The sanctuary in a semi-desert, arid landscape has existed since 1923. It extends to Utah and Colorado and consists of non-connected settlement ruins of Native Americans of the region. The remains of the settlement were protected in order to preserve at least the surviving fragments and to offer researchers a field of activity.

Abandoned due to lack of water

Before the arrival of the first whites, Ute and Navajo Native American peoples lived in the region. They practiced agriculture, whereby the lack of water was always a big problem. In the 13th century, the area was abandoned by the Native Americans, as long periods of drought presumably made successful farming impossible. The remains of the settlement were discovered by “whites” in 1854 as part of an expedition. Today, only half-ruined buildings or only the remains of walls have survived. Other definitely existing buildings have already crumbled to dust or can be recognized as a stony hill in the landscape. All six ruin sites of Hovenweep have been assigned to the so-called Pueblo culture.

Each excavation site has its own character

The National Monument Visitor Center is located in the state of Utah at the Square Tower archaeological site. It also has the highest number of recognizable building fragments. The Cajon settlement remains are located about 14 kilometers from the visitor center at the entrance to a canyon in Utah. The ruin site of Cutthroat Castle Pueblo in Colorado lies a little deeper within a canyon. There, in contrast to the other ruins, the buildings were mostly erected on rock plateaus and not partially embedded in the ground. As a result, only fragments have survived there. Wind and weather did a great job there.

The manageable ruins of Holly are dominated by a leaning tower and the so-called Boulder House. The Horseshoe Ruins in Colorado consists of a tower and some remains of buildings, which were once built in a suggested horseshoe shape to each other. The Hackberry site shows only a single surviving building. Scattered across the site, however, are other remains of buildings whose shape can only be guessed at.

The four ruin sites in Colorado

Unexplored settlement of the Anasazi

In 1919, the Yucca House National Monument was designated. In 1966 the area was included in the list of ” Historical Places ” of the United States. In Colorado there are many other sites of former Indian, mostly Anasazi settlements. The largest of the settlement sites is located on an “island plateau” in Colorado and is under strict protection as ” Mesa Verde National Park “.

The Anasazi settlement remains are extremely extensive and about 700-800 years old. The Yucca House National Monument was discovered by “whites” in the last quarter of the 19th century. At first, the buried complex was thought to be a former Aztec settlement. Therefore, the site was initially called ” Aztec Springs “.

Landscape near the city of Cortez in Colorado

The term “Yucca House” comes from Anasazi usage; there were probably many yuccas in the area of ​​the Yucca House National Monument at that time (do not belong to the palm family). The rock dwellings were probably abandoned due to lack of water due to extreme dry periods. Without water, no food could be produced. 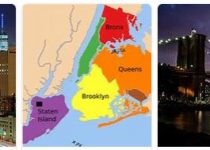